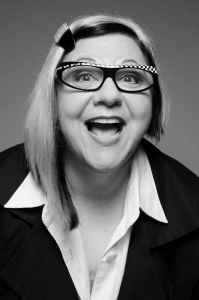 If one is bright and skillful, can bring a remarkable and fascinating background to the table filled with lots of twists and turns and make that work in a positive way, this is something to which we should all aspire. We are not speaking of someone at the beginning of a career. This can only be achieved by a forward-looking person, surrounded with life experiences and events, who then is able to transform it into a novel and inventive way. This describes Leila Witkin at this point in her own life. Her expertise has culminated in her current career as a qualified, professional executive coach. This also has been brought together in her new book titled “UnAfraid, UnFrazzled & UnFROGettable, a Practical Guide to Overcoming Stage Fright and the Fear of Public Speaking.” In order to become acquainted with Leila Witkin, one should really know a bit of how this clever, articulate and insightful person has arrived at this stage in her life.

We could say that life did begin on the stage, at least from the maternal side. Her mother was an actress and a director. It was something to which Leila aspired. Alas, she was also a shy child and needed to find a way to express her own talents and ideas. Her father was a lawyer and, in fact, his clerk was a much younger Nelson Mandela before his many years of incarceration. He was the one who urged the young Leila to “find her own voice” which took on many forms over the years as she matured and developed as a person and as a professional. For many years, she was an extremely successful television producer in South Africa. With her own award-winning weekly show, where she was both producer and director, it was with very good fortune that she first crossed paths with Dr. Mark Rittenberg. This charismatic educator and leader in the human development field was offering coaching courses to executives using theatre skills as his method to build communication in business. Leila Witkin had found her voice and her mentor.

Having immigrated to the United Kingdom now almost 25 years ago, she continued her association with Dr. Rittenberg over the years. He encouraged her to incorporate her very successful skills as a producer and director into becoming an executive coach. At the University of California (Berkeley CA) Haas School of Business, Leila Witkin received her certification as a personal life coach, corporate life coach and executive coach through The Coaching Academy run by Dr. Rittenberg. She has continued to harness and develop her life coaching skills with them to this day.

Eminent coach Brian Tracy has stated that, “success comes in cans not in can’ts.” This is definitely Leila Witkin’s philosophy, to work with clients to explore, expand and reinforce the positives. Now with her new book, “UnAfraid, UnFrazzled & UnFROGettable”, this is being taken a step further. There are thousands of books written on overcoming stage fright and the fear of public speaking. Many of them have very valuable information. None of them is written from the perspective of wit, humor and practical advice. Alan Stevens, Past President of the Global Speakers Federation, London, wrote the Forward in Leila Witkin’s book. His words say it best, “In my thirty-five plus years of travelling around the world delivering speeches, I have never come across a book which combines fun, in-depth knowledge and practical advice in such a valuable way – a superb guide.”

Leila Witkin’s current goal is spread the philosophy, skills and techniques that are espoused in her book to as many individuals, groups and businesses to help those who need and want to “find their own voice” by overcoming stage fright and the fear of public speaking.